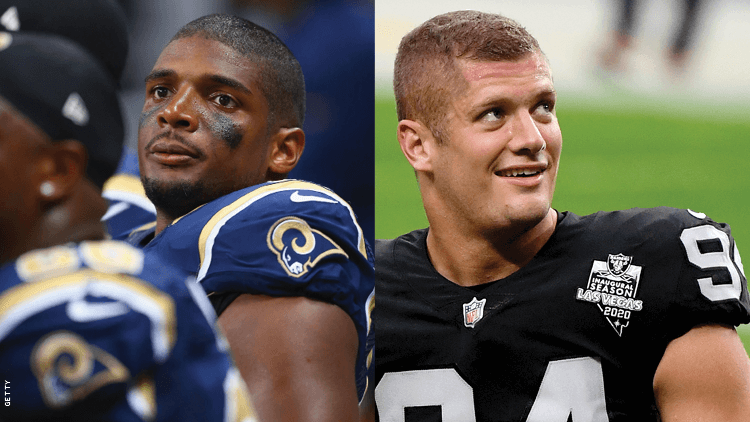 Previous item Stepping up to the plate Next item LGBTQ+ Online Discourse...

I was seventeen when Michael Sam came out right before he was drafted by the then St. Louis Rams. The massive media storm that surrounded his coming out was extraordinary. Sam’s career was sadly cut short after a few pre-season games, leading to a myriad of excuses as to why he is not playing today. I felt change was coming  because Obama was in office and marriage equality was the hot topic around the country. I mean it was 2014, why wouldn’t we have a openly gay player in the NFL?

This past Monday history was made again, Carl Nassib, an active NFL player of the Las Vegas Raiders, publicly came out on his Instagram account during Pride Month. I immediately thought of Michael Sam and my seventeen year self having conversations with my mom over what it would take for us to finally have an openly gay player succeed in the league. A little naïve but optimistic, I did not understand the implications of what that could mean. However, I do know in the past seven years since Sam’s coming out moment and former NFL athlete’s post career coming outs that has led us here. Support for Nassib flooded social media with newly signed Arizona Cardinals defensive end, JJ Watt, tweeting in support, “Glad you feel comfortable enough to share and hopefully someday these types of announcements will no longer be considered breaking news,” Nassib made it clear in his statement that representation and visibility are important and donated $100,000 to the Trevor Project leading the NFL and his former Penn State coach James Franklin to match his donation culminating in $300,000 total raised for the life saving organization.

The news of his coming out hit home and reaffirmed my own belief for change we can bring to the valley. While serving on the Youth Advisory Council, I have had the honor and privilege to work with Clayton Davenport, one n ten’s Director of Marketing and Development, on one of my main focuses which is LGBTQ+ inclusion in sports. Throughout the pandemic, Clayton and I have been talking with the major leagues such as the Coyotes, Diamondbacks, and Mercury on collaborative programs involving the LGBTQ+ youth here in the valley. I wholeheartedly believe if we set up a system with these teams where we can team up in programming, we can change the sports landscape here in the valley. I have seen the goodness in the staff members I have been fortunate to get to know on these teams and know they personally care about our community.  I hope as a result of these relationships, we can get to a point where because of these initiatives Arizona can get their very openly out player drafted in their respective sport due to the support of One N Ten and the teams out here in the valley.  The ground breaking news this Monday only reaffirmed my  conviction as to why these programs are vital. Having openly LGBTQ+ professional athletes and these programs may even save a closeted young athlete’s life.