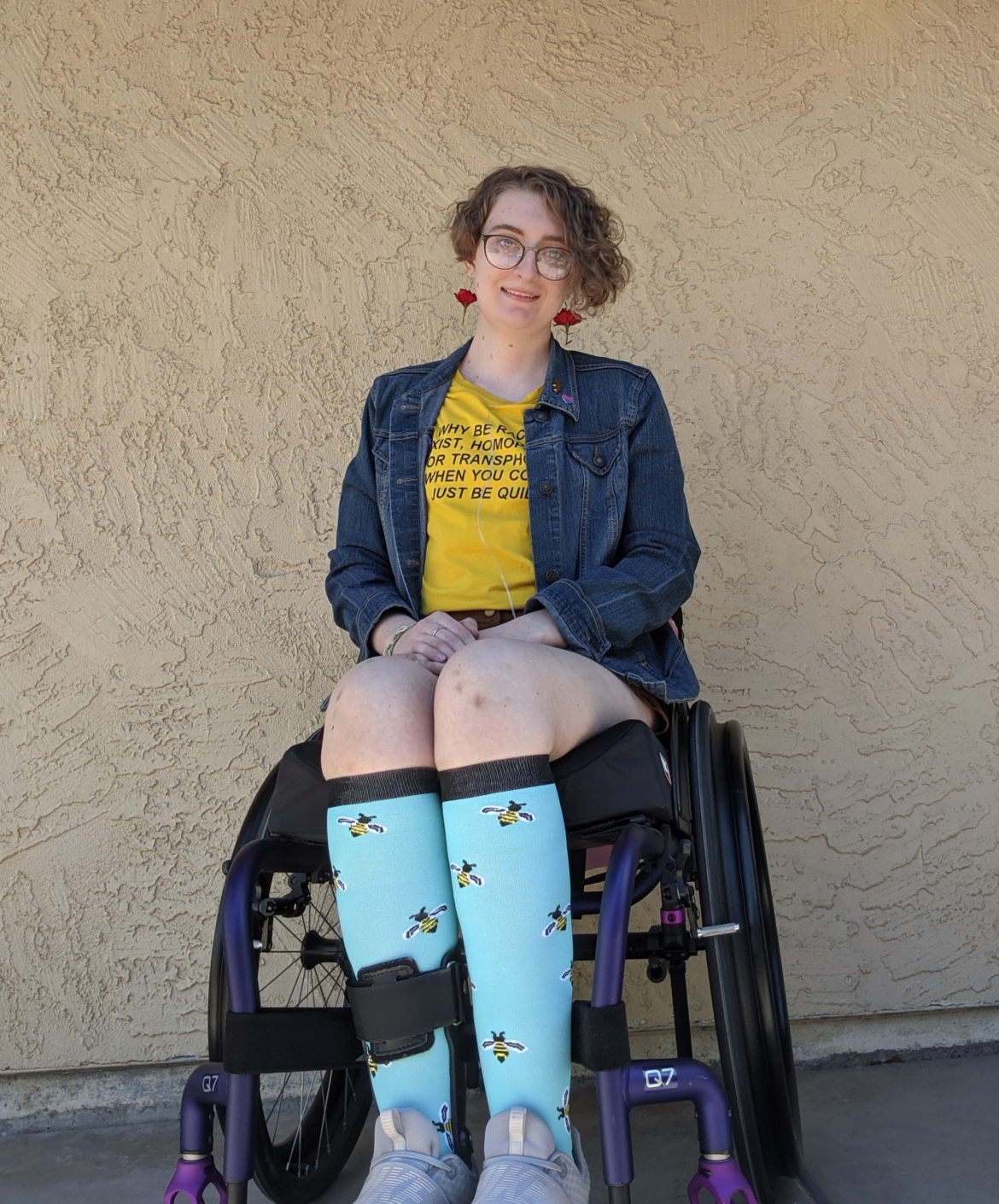 Previous item How to Qualify for... Next item Autistic, Trans, and Left...

Disabled and Trans: Learning to Navigate My Intersectionality

It took me a while, and a lot of work, to come to terms with my non-binary trans identity. I had to look deep within myself and unearth the reasons I felt I wasn’t “trans enough”. Society told me that the only trans people that were valid were those transitioning from one binary gender to the other. Becoming involved in my local LGBTQ+ community has only solidified that as untrue. Being transgender means you don’t identify with the gender you were assigned at birth. And while the question of whether I’m ‘trans enough’ still rattles around my brain sometimes, I now have the confidence and certainty to respond with a resounding “Yes!”. I feel I would never have reached this point without another aspect of my identity coming into play though.

You see, I’m disabled. I have three multi-systemic chronic conditions and deal with severe chronic pain. All three conditions are genetic and come with various co-morbidities. But I haven’t been disabled since birth. After sustaining a major concussion in my sophomore year of high school, my genetic conditions worsened drastically. I was unable to attend school regularly and soon doctors’ appointments, scans and tests, and ER trips consumed my life. My body was no longer under my control, it no longer felt my own.

I became disabled a few years before I started questioning my gender identity. In the time between I learned many hard lessons in something called Radical Acceptance. Radical Acceptance is a practice in which fighting and struggling against the reality of one’s situation is more harmful and is usually the cause of greater suffering. This practice advocates accepting yourself and your situation without question, blame, or pushback so that you can better move through and past it. I had to realize I was not to blame for my disabilities and accept that there were some things I just could not do. Once I did, I became more confident and spoke up for my accessibility needs. I began to understand my limits and learn when I was pushing too hard. This way of thinking became extremely useful when I began to realize I was uncomfortable in myself and my assigned gender.

I want to note that non-binary is an umbrella term for multiple genders that fall outside of the binary two-gender system. Hence the term non-binary. And that while dysphoria is different for every trans person, non-binary dysphoria is a bit harder to pinpoint and describe. Often, non-binary folk aren’t transitioning from one gender to another. They are transitioning away from their assigned gender at birth (AGAB). So transition is less about passing and more about relieving dysphoria. Therefore, what transition looks like will vary greatly from person to person.

What transition looks like for me has yet to be decided. Because of my medical conditions, there are restrictions on the types of interventions I can use. Binding is difficult and often uncomfortable because I have unstable ribs that partially dislocate. I also have a port-a-cath in my chest, which is a type of central venous catheter most people associate with chemo patients. Hormone replacement therapy (HRT) is another intervention I have to approach with caution. The known effects HRT has on people with Postural Orthostatic Tachycardia Syndrome (POTS) is shaky at best and vastly understudied. Also, having Ehlers-Danlos Syndrome (EDS) means certain birth control methods can actually worsen my joint hypermobility and increase the frequency of my dislocations.

All this means that there may be interventions I want, but would ultimately be detrimental to my physical health. Surgeries I cannot have, certain types of HRT I can’t be on, etc. So instead of fixating on what I may or may not be able to do in the future, I turn to Radical Acceptance. I know there are things about my body that make me uncomfortable, they might always make me uncomfortable. That’s ok. Acknowledging that is the first step. Then comes the hard part, putting in the work. Working towards accepting the parts of my body that cause me dysphoria and discomfort.

As I became more sure of my non-binary identity, I realized I didn’t have to love or absolutely adore the things that made me dysphoric (I sure don’t love my voice!), but I try not to hate them. They are apart of me after all and I want to cherish my whole self. So instead of standing in front of the mirror fixating on parts of myself that I don’t like, I point out things that instead make me happy, euphoric even. This is usually things I like about myself or something someone has complimented me on. On days I am extra dysphoric it is simply something that doesn’t make me uncomfortable.

I have been told that I am “very aware” or “very conscious of my problems, my mind, and my body”. This is because, as a disabled person, if I don’t know what’s going on with my body I could end up in a serious bind (no pun intended). Knowing the ins and outs of my conditions, medication interactions, allergies, and how I handle sedation are all things I’ve learned the hard way. Doctors aren’t gods after all, and they make mistakes like everyone else. It’s up to me to make sure that I remain safe in the hands of my care team.