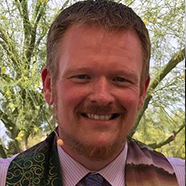 Rev. Dr. Andy Burnette has served since August 15, 2012 as Senior Minister at
Valley Unitarian Universalist Congregation in Chandler. Burnette was a member of the
Unitarian Universalist Association’s Board of Trustees, serving as the convener of the
board’s Governance Working Group.
He was minister at the Unitarian Universalist Community Church in Danville,
Indiana from 2007 to 2012. From 2000 to 2007, Burnette served congregations in the
Church of the Nazarene in Southern Indiana. From 1998 to 2000, he was a journalist
covering local government and writing a humor column, also in Indiana.
He is married to Heather Powell-Burnette. They have two children; Sasha (2002)
and Josie (2008). Rev. Dr. Burnette holds a Bachelor of Science degree in Mass
Communication from the University of Evansville (Evansville, Indiana) and a Master of
Divinity from Chapman Seminary (Oakland City, Indiana). He earned a Doctor of
Ministry degree with a focus on social class and American religion, emphasizing
Unitarian Universalism, at Pacific School of Religion in Berkeley.